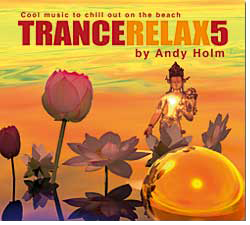 Cool sounds for chill out, dancing, dreaming away, yoga, traveling or easy listening.

Andy Holm has lived happily “Down Under” in sunny Australia for more than 20 years. He was born in Hamburg in faraway Germany, where he published his first album of New Age music in the early 1980s. Eager to expand his musical repertoire, he spent two years in India, where he was enchanted by the celestial, meditative sounds of the sitar and tabla that he heard in Kashmir. Afterwards he went to Australia, where he encountered and learned to appreciate another fascinating instrument: the didgeridoo, the magical cult instrument of the Aborigines, the indigenous people of Australia.

Enthusiastic about Australia’s relaxing and creative atmosphere, he found a new homeland in the metropolis of Sydney. The kindness and openness of the people and life on the Pacific Ocean with its gorgeous beaches, including trendy “Bondi Beach,” captivated him and inspired him to compose new pieces of music. He also met Kerrilyn, the Australia woman with whom he chose to share his life. Their daughter Maanee was born on November 9, 1989, the very day that the Berlin Wall fell in Germany. Andy soon published additional CDs of his own compositions. He played with the didgeridoo virtuoso Alan Dargin and performed live more than 400 times in the 1990s. Whether in front of Sydney’s famous opera house, on the chic promenade at Darling Harbour, or on a concert tour in Singapore, audiences are always enthusiastic about Andy Holm’s relaxing and unusual music. Finally, he surprised his fans with a solo piece called “Rebirth,” a sort of theater show in which he performed as an actor and musician.
The year 2000 was a fateful one and a turning point in his life. He was supposed to provide musical accompaniment for the grand opening of the “Para-Olympics” in Sydney, but destiny had other plans. A car cut him off and he was catapulted from his motorcycle. Seriously injured and unconscious, he was rushed to a hospital. He awoke to find that he’d suffered numerous broken bones and dangerous spinal contusions. After many surgical operations, he could finally leave the hospital, but was initially confined to a wheelchair. He gazed longingly through his window toward the ocean and listened to the sound of the surf. Classical medicine had nothing more to offer him, but Andy and his wife Kerrilyn didn’t give up. After 20 months’ time, and thanks to alternative healing methods, he was able to walk – first on crutches and then unassisted. It was a miracle. Andy felt as though he’d been reborn.
After having lived for 20 years in the ever-expanding metropolis of Sydney, the time had come for a change of scene. Andy, his wife and their daughter moved in 2003 to Byron Bay, a more peaceful venue 800 kilometers north of Sydney. This extraordinarily beautiful seaside location has a pleasant subtropical climate. Byron Bay is still characterized by the alternative lifestyle practiced by its residents, many of whom first settled here in the 1970s and Eighties. At this uniquely energetic place, Andy found the ideal spirit that inspired him to produce wonderful new compositions, e.g. for documentary films and festivals. Working in his own studio, he repeatedly delights his fans with new compositions. His music is a brilliant and lively blend of electronic synthesizer sounds and traditional instruments such as the didgeridoo, Asian flutes, kalimba and berimbau.