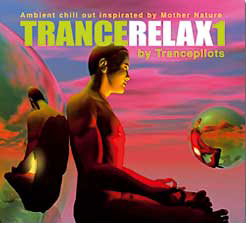 The "Trancepilots" are the two German jazz and world musicians Jerry Cosmo and Luigi Campala. Their music is a successful blend of diverse influences and musical styles from around the world. Alongside classical Western instruments, a variety of Asian and African percussion instruments also repeatedly enliven their music. Their wonderful sounds build a bridge between the long, airy arcs of meditative music and earthy, body-related rhythms. This juxtaposition of medial consciousness and grounded energy lets listeners experience the exchange in both directions.

The track called "Desert Trance" features the ch'in, an unusual, five-stringed instrument that's rich in overtones. The ch'in can be blown, plucked, struck, sung into or made to vibrate by placing directly atop a loudspeaker. Each method of playing creates a specific tone, but the ch'in always has an analogue, warm, celestial sound.

In all four pieces, the musicians develop meditative sonic spaces of epic breadth. They invite characters to enter and exit their sonic stage. And they tell stories full of musical depth. It's like an endless flow of time and space. They also build long, groovy arcs which they keep in well-balanced tension with shimmering sonic textures and fascinating, hypnotic, instrumental improvisations. They accomplish this by drawing on their many years of experience as band musicians and as producers of film music, African dance productions and Tribal Earth projects. They're supported by the singer Junesix, whose ethereally light vocals have an inspiring vitality that transports her listeners into a world of feelings, visions and relaxation.